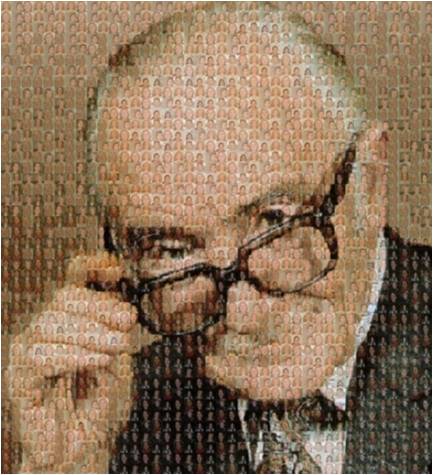 Professor Archibald Leman Cochrane, CBE FRCP FFCM, (1909-1988)
(as depicted by a composite of hundreds of photos of Cochrane contributors)

Why 'Cochrane'?
Cochrane is named in honour of Archie Cochrane, a British medical researcher who contributed greatly to the development of epidemiology as a science.

Archie Cochrane is best known for his influential book, Effectiveness and Efficiency: Random Reflections on Health Services, published in 1972 [1]. The principles he set out in it so clearly were straightforward: he suggested that, because resources would always be limited, they should be used to provide equitably those forms of health care which had been shown in properly designed evaluations to be effective. In particular, he stressed the importance of using evidence from randomized controlled trials (RCTs) because these were likely to provide much more reliable information than other sources of evidence. Cochrane's simple propositions were soon widely recognised as seminally important - by lay people as well as by health professionals.

In 1979 he wrote, "It is surely a great criticism of our profession that we have not organised a critical summary, by specialty or subspecialty, adapted periodically, of all relevant randomised controlled trials."[2] His challenge led to the establishment during the 1980s of an international collaboration to develop the Oxford Database of Perinatal Trials.

In 1987, the year before Cochrane died, he referred to a systematic review of RCTs of care during pregnancy and childbirth as "a real milestone in the history of randomized trials and in the evaluation of care", and suggested that other specialties should copy the methods used.[3] His encouragement, and the endorsement of his views by others, led to the opening of the first Cochrane Centre (in Oxford, UK) in 1992 and the founding of The Cochrane Collaboration in 1993.

Works by and about Archie Cochrane
Cochrane AL. Effectiveness and Efficiency. Random Reflections on Health Services. London: Nuffield Provincial Hospitals Trust, 1972. (Reprinted in 1989 in association with the BMJ, Reprinted in 1999 for Nuffield Trust by the Royal Society of Medicine Press, London (ISBN 1-85315-394-X) .) [1]

Archie Cochrane: Back to the front, edited by F. Xavier Bosch, uses Archie Cochrane's experiences in the Spanish civil war as a starting point to discuss his life and work, and his influence on the founding and development of The Cochrane Collaboration. Includes commentary from a diverse group of family, friends and colleagues. Copies of the book are available for €75.00 (GBP £52.00); to order, use this order form.