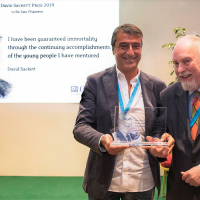 In the presence of over 200 delegates including some of the world’s leading experts from 33 countries on five continents, the GIMBE Foundation established an award named in memory of David Sackett, the undisputed father of Evidence-Based Medicine. The first edition of the prestigious award was assigned to Sir Iain Chalmers for:

In his touching speech of thanks, Sir Iain referred to Sackett’s inspired and inspiring leadership of the Evidence-Based Medicine movement, his invaluable contribution as the first chair of the Cochrane Collaboration, and his precious contributions to the James Lind Library. Sir Iain ended his speech stating ironically that «EBM’s proselytization is now occurring on a global scale and threatens the very existence of “for profit”, “doctor-centred”, “authoritarian” medicine as we know it», and was warning clinicians to beware of being seduced by the Siren calls of the priests and priestesses of Evidence-Based Health Care in Taormina.

The report of the ceremony is available at: www.ebhcconference.org/previous_editions/2019/presentations/02.04.%20Cartabellotta_Sackett_Prize.pdf